Art Labs feature specially curated projects by leading galleries, art institutions, and art collectives within the show. Check back in November for information on the Art Labs for Red Dot Miami 2020.

It’s art to walk on! Step inside and walk into and on Hugo Diaz’s special kinetic installation. As an artist, Diaz is an important member of what could be called the new generation of Venezuelan kinetic art. This art is based on the aesthetic of real movement and the virtual in geometric abstraction, as created by the use of combined simple geometric forms in subjective compositions. It’s literally two diverse spatial dimensions combined in an effort to represent a three-dimensional reality. In this special installation, Diaz has set out to go beyond what has been reached previously via an exacting, errorless, and rigorous method to achieve it. Go ahead—step on the art! Take the journey into the movement of kinetic abstraction.

More about the artist:
Hugo Diaz, born in San Cristóbal, Táchira State, Venezuela, in 1965, has lived in Miami, since 2003. A self-taught artist, he has a degree in engineering of computer systems from the Metropolitan University, Caracas, Venezuela. Diaz also went to several universities to tackle diverse career studies, such as the Cristóbal Rojas School of Art in 1987 and the Faculty of Architecture at the Central University of Venezuela, both in Caracas.

Pictorially, his work is also based on optical illusions obtained by retinal vibration and by taking advantage of the impossibility for our eyes to watch simultaneously two contrasted surfaces that are intensely and brightly colored. Throughout his career, Diaz has been constant in the search of developing his interest in color, the line, the light, and the figurative thing, integrating them at the same time as managing to produce the impression of the energy in movement. His work encompasses geometric abstract forms, figurative color, lines, light, and elements to create an unforgettable visual experience. Inspired by the international movements of geometric and kinetic art initiated by masters such as Israeli artist Yaacov Agam (b. 1928), French-Hungarian artist Victor Vasarely (b. 1906, d. 1997), as well as Venezuelan kinetic art masters Jesús Rafael Soto (b. 1923, d. 2005) and Carlos Cruz-Diez (b. 1923), it is important to highlight that Diaz has reached his own new dimension, going beyond them and creating a novel innovative reading for the geometric art genre. 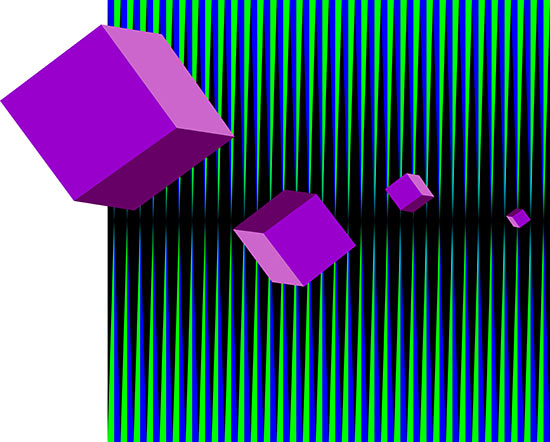 Tiny Pricks is a public art project created and curated by artist Diana Weymar. Contributors from around the world are stitching Donald Trump’s words into textiles, creating the material record of his presidency and of the movement against it.

Tiny Pricks Project holds a creative space in a tumultuous political climate. The collection counterbalances the impermanence of Twitter and other social media and Trump’s statements as president through the use of textiles that embody warmth, craft, permanence, civility, and a shared history. The daintiness and integrity of each piece stand in stark contrast to his presidency.

More about the project:
Artist Diana Weymar explains: “On Jan. 8, 2018, I stitched ‘I am a very stable genius’ into a piece of my grandmother’s abandoned needlework from the 1960s. When I posted it on Instagram, the response was immediate and overwhelmingly positive.

“Assuming he would become more presidential over time, with only the occasional ridiculous tweet, I decided to stitch one Trump quote a week. However, it quickly became a daily practice, as I tried to keep up with the outpouring of unpresidential text.

“Friends asked if I would host workshops so that they could join the project. Tiny Pricks Project has since become the largest textile Trump protest ever with over 1,100 Tiny Pricks and hundreds of participants globally.”

The series will go strong until Trump is out of office. 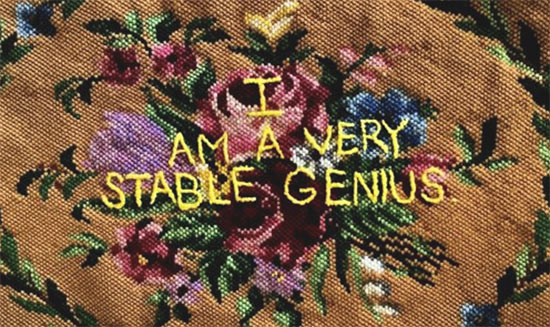 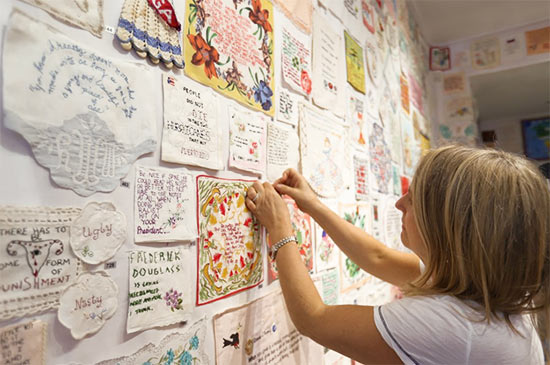 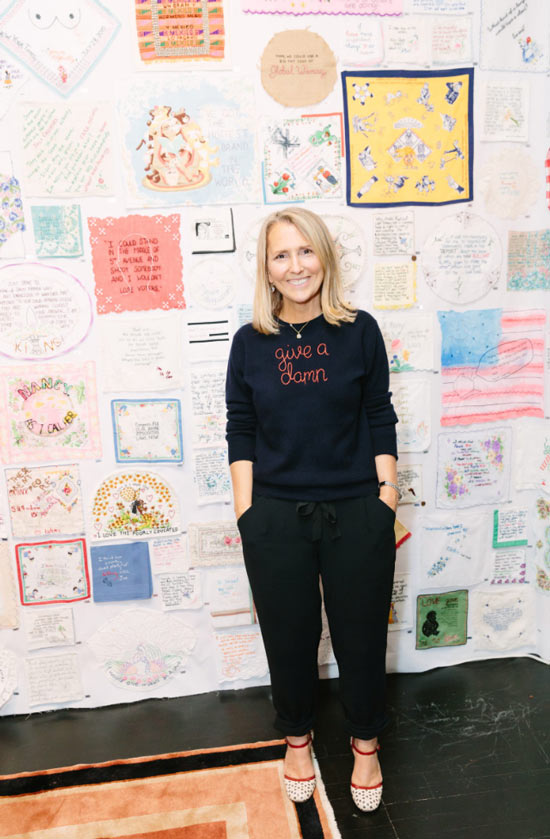 In the art world, critical conversations revolve around color, contrast, composition, and artist intention. Step inside the Art on OLED experience and the conversation could almost be the same. The most advanced display technology there is, OLED is a display panel with bright, self-illuminating pixels and stunning color for the best TV experience ever. OLED TVs create home entertainment unlike anything you’ve ever experienced. At “Art on OLED” you will be able to experience the perfect black levels, wide viewing angles, accurate color and amazing thinnovative design that OLED technology can offer. Step in to the experience and see the collaboration of OLED and digital art.

OLED stands for organic light-emitting diode. It’s a type of TV screen constructed in a completely different way than popular LCD or LED screens. Instead of creating images on screen with backlight that flows through a series of filters and polarizing layers like an LCD screen, OLED technology energizes and lights up each and every individual pixel independently, generating that perfect black levels and dazzling colors with infinite contrast level.

Come and experience the unexpected by visiting and seeing the state-of-the-art picture quality that OLED brings. 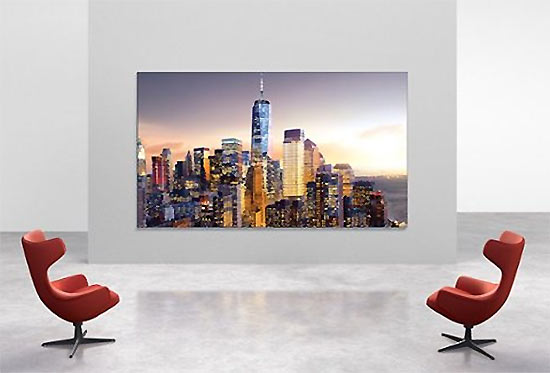 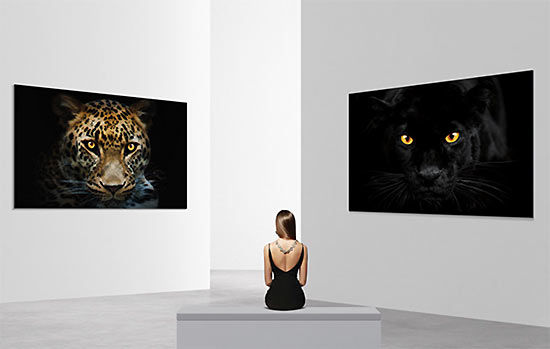 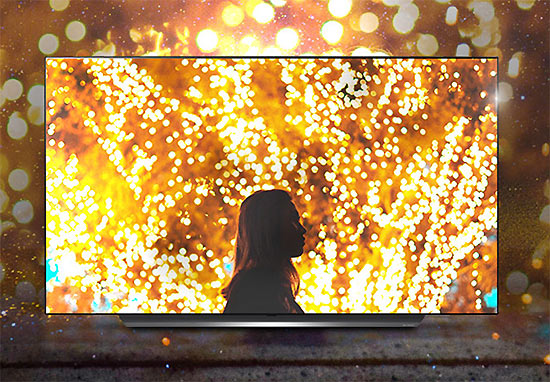 Can fashion be art? Is art that is worn really fashionable—or does it just commercialize the artist’s work? Answering these questions is Zenith Art & Fashion, proving the fusion of art and fashion through sculptural masterpieces to create artful couture.

More about the artists:

Enrique Cabrera is a contemporary Mexican multidisciplinary artist and a young entrepreneur. Originally from Veracruz, he is a renowned musician, sculptor, and professional photographic restorer, dedicated to promoting Mexican culture, taking Mexican art farther than its frontiers.

Cabrera has done several artistic restorations in different parts of the world, in collaboration with CENIDIAP (National Center of Investigation in Fine Arts) and INBA (National Institute of Fine Arts). He has also participated and collaborated in international interior and decoration projects with important hotel chains.

Cabrera participated in the restoration of the Bicentennial Route 2010 in the center of Mexico, restoring some of the most important monuments of Mexico.

Cabrera is working on several personal and private sculptural projects as well as photographic works with the intention of showing the cultural richness of Mexico. He is an important entrepreneur who promotes the art of the old and the new values of his country. He explains: “Art is an emotional and honest way of seeing life.”

Cabrera’s newest collection is his monumental sculptures Palmarius, Latin for “masterpiece.” They begin The World Tour of Immortality in Miami, a global tour to spread Mexican art and culture across 28 countries. The Palmarius skulls and sculptures showcased are 6-feet tall with incredible artisan detail. 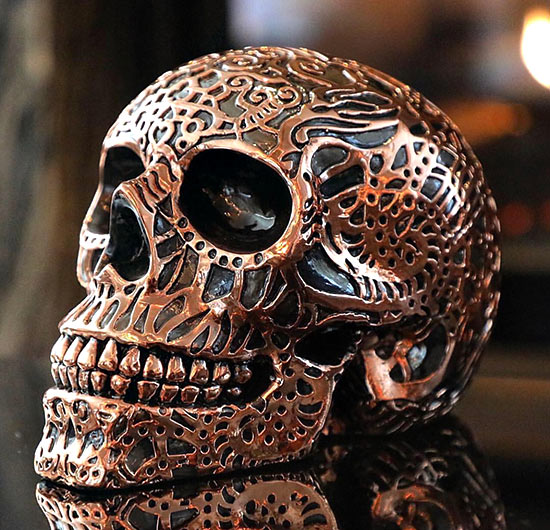 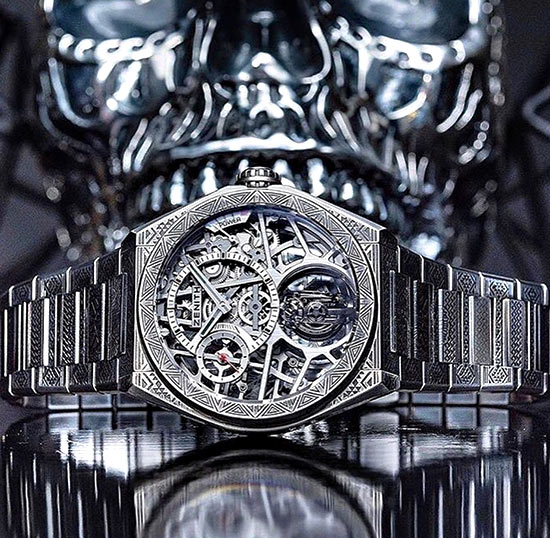 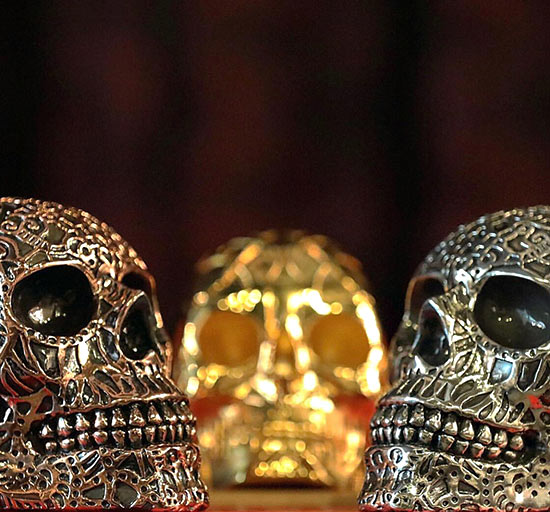 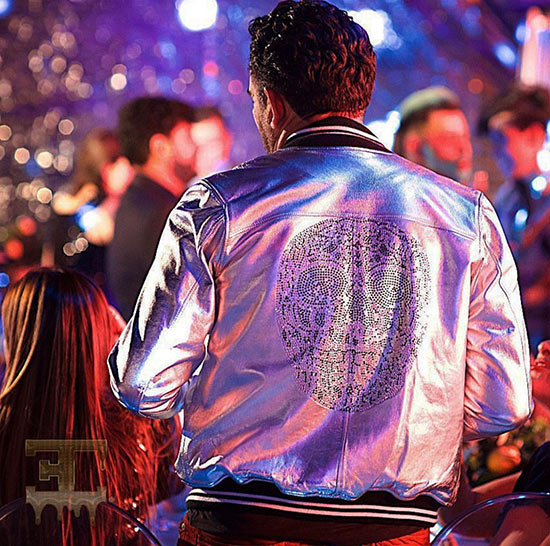 Engineer, sculptor, stage designer, and interior designer, Fernando Cid de Diego was born in Valencia, Spain, where his father was the personal lawyer of Salvador Dali. Cid de Diego was raised in the presence of Dali since the young age of 14 years old, influencing and inspiring him and in some ways becoming an artist because of his influence, although he had already been sculpting since the age of 9. Despite being a master draftsman, Cid de Diego specialized in the world of sculpture, which he has been selling around the world to private collectors for over 55 years.

For Cid de Diego, his drawing is nothing less than the perfect tool with which to give contour to his works. Cid de Diego thinks volume, sees volume, and dreams volume. Thus, his captivation by the artform makes perfect sense. The result of all this is an artist who reveals himself as a cultivated, humanistic, and technical man. In Cid de Diego is the soul of a Renaissance man with an insatiable curiosity, capable of writing a poem, working with machinery, painting a canvas, and carving a sculpture.

Cid de Diego and his daughter have fused their two worlds of art and fashion creating a collection of handmade luxury Sculpture Bags. Together, father and daughter have created a magnificent world of wearable art. 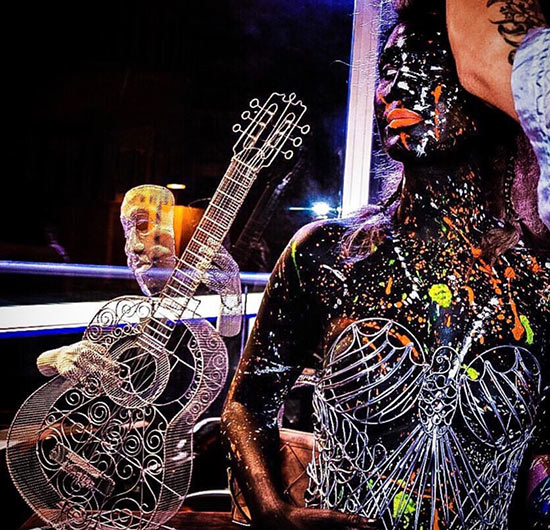 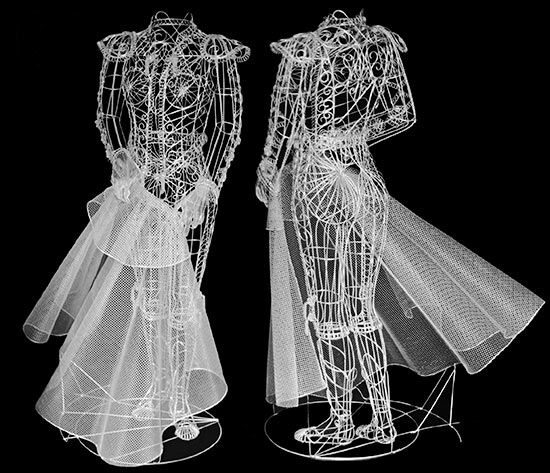 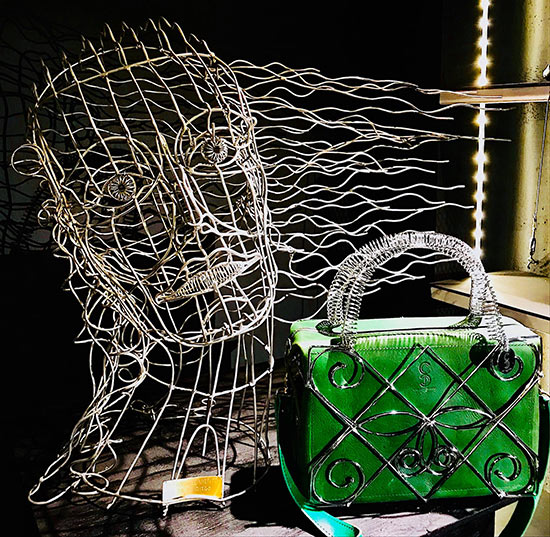 Carla Cid de Diego is a Spanish-American fashion designer, born in Spain but raised primarily in Miami. She has always been immersed in the world of art, having been brought up among a family of artists. Heavily influenced by her father, who is a celebrated sculptor, and her mother, a fabulous painter, both having worked extensively in the United States opera industry on the creation and design of the scenery for an array of productions. Cid De Diego has been designing costumes since the age of 16 for theatrical productions in the world of opera, theater, ballet, musicals, and circus.

Cid de Diego joined forces with her partner, Jonathan Fakinos, a Greek-English architect and designer, and together they created their brand Carla Cid de Diego, Madrid, a luxury fashion brand that fuses art and fashion to create luxury wearable art and accessories. Each piece of the textile part of the collection is handmade by Cid de Diego with the most exquisite materials, and the collection of sculpture bags is created in collaboration with Cid de Diego’s father, sculptor Fernando Cid de Diego, completely made by hand, creating one of a kind, unique pieces of wearable sculptures plated in precious metals such as Palladium or 24kt gold.

Joining the two worlds of Art & Fashion, Carla Cid de Diego and Jonathan created Zenith Art & Fashion, and together they represent artists and designers from all around the world in a unique luxury platform that fuses the arts and brings them to the world. 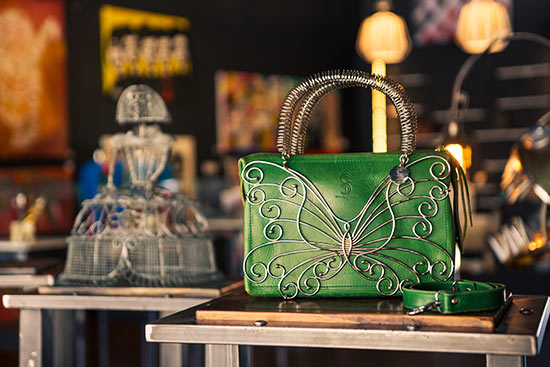 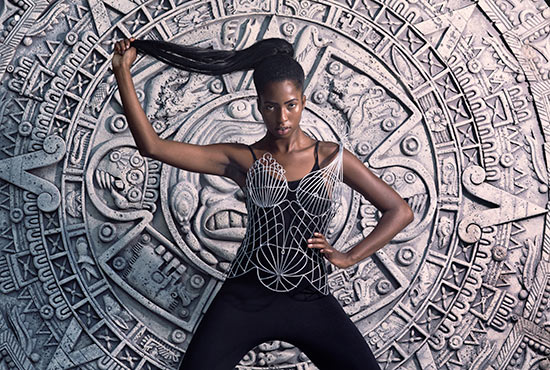 Architecture takes on an artful pose with The Art of Living, presented by Cervera Real Estate, a Miami-based luxury real estate brokerage with a 50-year heritage defined by performance, innovation, and a passion for selling homes where beautiful memories are made. Featuring the best of South Florida’s existing and new-construction real estate offerings, including: Aston Martin Residences Miami, Aria on the Bay, Elysee Miami, Smart Brickell, and The Ocean Resort Residences Conrad Fort Lauderdale Beach, the collection showcases a variety of residences – ideal for either primary use, as a second-home, or flexible-use – for the discerning lover of life, beauty, art, and sunshine. There’s only one question: Where will you hang your art collection? Stop by and explore the possibilities.

Are you amused? Are they looking at you—or are you looking at them? Step closer and see for yourself. In their beauty, each one unique, the muse is a reflection of you, a reflection of us. They honor the theme of the show—[ILLUMINATE]—to demonstrate new trends in the contemporary arts. Artist Ricardo Cardenas-Eddy’s Muse Series sculptures, inspired by the art muses of Zeus in Greek and Roman mythology, welcome art lovers and collectors to Red Dot Miami. Each muse is fashioned from concrete, the unusual yet characteristic media used by Cardenas-Eddy in both his paintings and his sculptures. Each resulting artwork, composed of cement and reinforced with steel bars, appears as if it has been dug out from a cement block or ancient wall. Amuse yourself, find each one, and let the muses delight you. There’s even one where you can add your musings to the art! 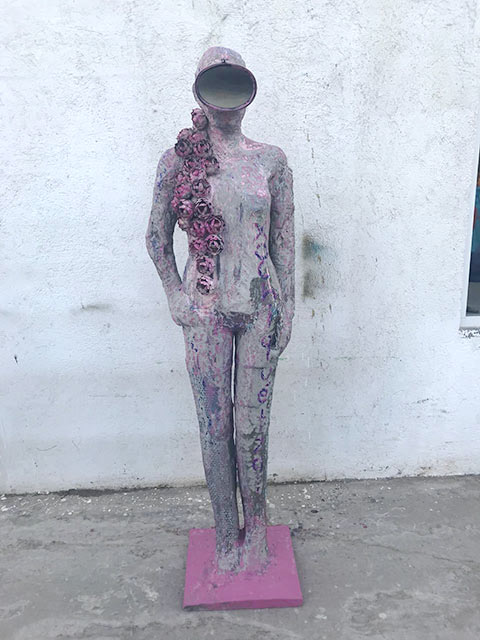 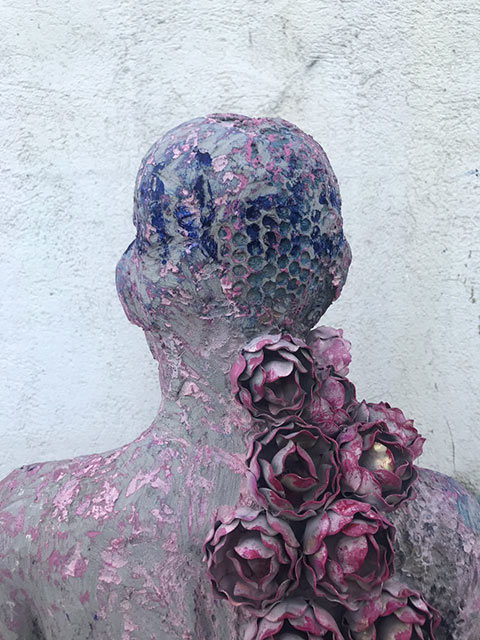 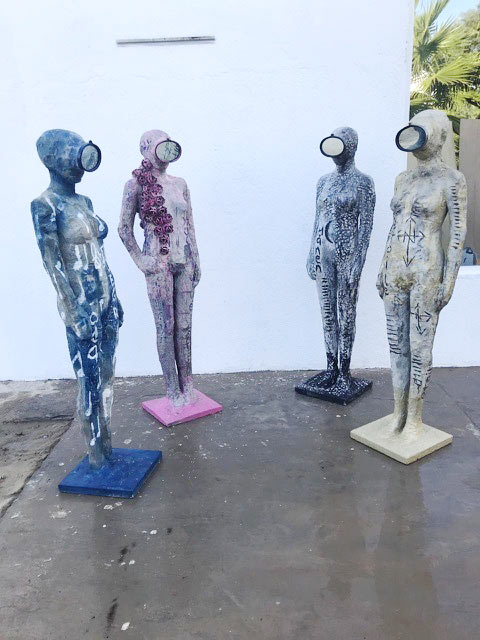 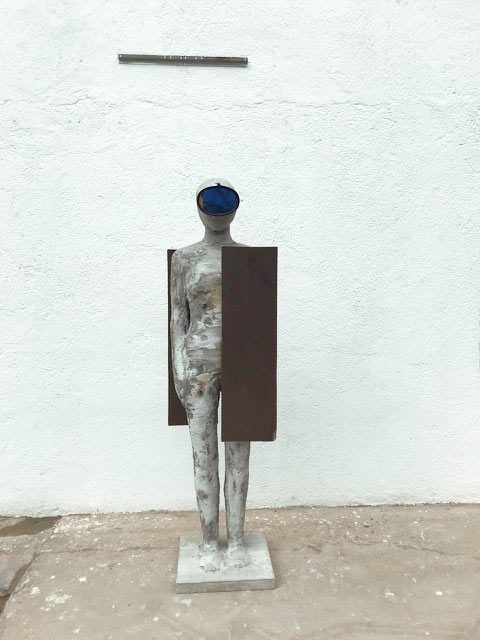 Location: Look for the Red Dot Miami Selects Awards throughout the show

The Red Dot Miami Selects Judges will make their favorite artworks choices on Wednesday, December 5, at the Opening Night Preview Party! We thank our prestigious panel of judges—each one an influencer in the art and design world of the Miami area.

Are their winning choices your favorites too? Walk the show to find each one. 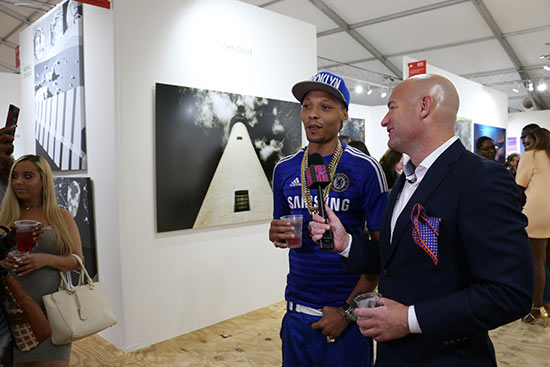 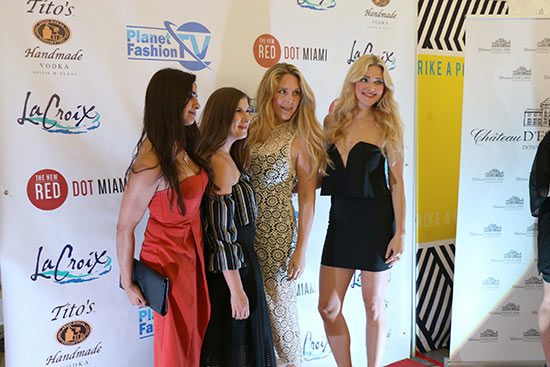 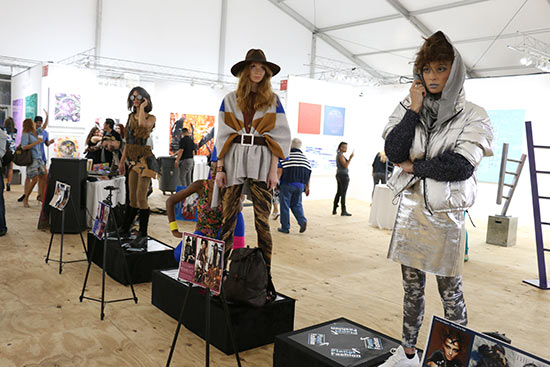 Interested in seeing some of the mesmerizing Art Labs from our previous years’ shows? Visit our Art Labs archive page by clicking below!