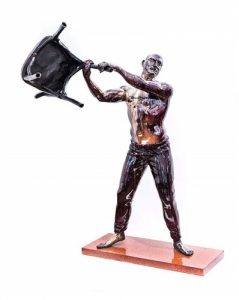 Artist Bio:
Egyptian artist Kamal Elfeki creates powerful life-sized bronze sculptures which explore some of the questions and issues faced by modern man on a daily basis, ranging from the cultural to the political. He has described his oeuvre as “the search” into the essence of himself, modern man, and man throughout time; asking who we are, why we are here, and what the necessity is of art in society. Utilizing a blend of traditional as well as abstract approaches to the representation of the human form depending on specific concept he wishes to expose in a piece, Elfeki seeks to open a dialogue with his audience about the issues that he chooses to elucidate, while also representing himself and his identity. Although some of his work can make use of shocking or disturbing elements, he seeks to retain a certain level of familiarity through the use of figuration in order to keep his work accessible.

Elfeki has received numerous grants and awards for his work throughout his career, including two full-time grants from the Egyptian Ministry of Culture in 2011 and 2012, a Cairo Salon

Award in 2013, as well as an Alexandria Biennale Award in 2014. In 2014 he was also awarded the Egyptian Award for Creativity. He currently lives and works between Egypt and Italy.