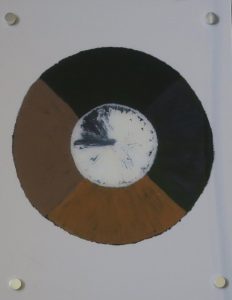 Artist Bio:
Cecilia Thibes was born in Parana, South of Brazil. Art manifestations have always been a part of her life. Since Cecilia Thibes earliest memories, she felt challenged to grasp the essence of art and its various possibilities. Something that absorbed her inner self and engaged her on a long intellectual and practical research. In 1986, the artist chose to study Anthroposophy at the Studiumjahr Goetheanum Institute, in Dornach, Switzerland, which would impact and influence her career for many years into the future. After living for a time in Europe, Thibes went back to Brazil and participated in two advanced training programs within the Anthroposophical Artistic field. One of the paths that caught her interest and later became part of her soul and career was Artistic Therapy, at the Artistic Therapy Program at Paulus Center and the other was painting, drawing and composition, at the Art Center, both In São Paulo. Because of all her deep life experiences with art connection, her atelier has been an active space for work as an Art Therapist, Art Teacher and Painter. It is also a place where the artist has a permanent collection of her art work.

Fernanda Dabus was born in Santa Maria, Brazil but has lived in the US since 2004. Her career started in psychology and psychoanalysis, but slowly, Art began to manifest itself more powerfully in her life, gaining strength and permanence. First with dance and music, and many years later in psychology and psychoanalysis. Art has helped Fernanda as she delved deeper into her emotions, her relationships, exploring different vibes, different colors.

The art of exploring new spaces has long been part of who she. Attending college in a city far from home, seeking a graduate degree in another, entering marriage, moving abroad, living in different cities like Chicago, St. Louis, Boston and Miami, and finally and essentially, three times in the “art” of motherhood…are forms of dancing according to music, new experiences, creating new contexts, making Art of life’s varied colors.  Some days, the blue of sky and sea imposes itself; on others, yellow with its sunny warmth and glow; or passionate red; on others, the peaceful serenity of white; on many others the gray of cloudy, gloomy days, arriving to black, like the darkness of fears, but also of glamour and refinement.