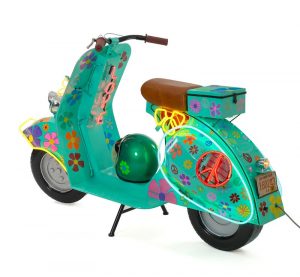 Artist Bio:
Ilan Neuwirth was born smiling in Tel Aviv. He moved to the US when he was 12, returning to Israel at 18 to join the Air Force. But the US was his home, and at 21 he returned to begin his first career: teaching windsurfing. From there he began selling the equipment for the water sports he taught. He grew his business until his store was the nation’s #1 retailer for several water sports brands. He eventually sold the company and pursued his next passion: real estate. Over the next few years, he built a successful South Florida real estate firm. In both cases, the secret to his success was his ability to subvert trends. He was surprising, fun, clever, and kind. He draws people into his passions with creativity and rigor, finding new ways to promote his ideas and putting the best of himself into everything he does.

Ilan has traveled, so far, to 50 countries and all seven continents, to rural towns, remote villages, and some of the biggest cities in the world. To see the world, for Ilan, is to see people, and to meet the world is to embrace the ways the people in the world are living. The people that he sees in his travels, whether around the world or in his own neighborhood, are what inspires Ilan’s art: from the colors and patterns they wear to the way they talk and laugh, the way people express themselves is what inspires Ilan.

He learned his love of travel from his father, who brought Ilan with him on cruise ships so often that he calls the ocean his second home. His mother, meanwhile, built a beauty empire in Israel. She taught him the value of hard work, and the happiness that we can find in providing joy and beauty to others. His parents taught him how to be a part of a community; they taught him pride, humor, and rigor. Now his wife, his daughter, his son, and his dog are the essence of his life. They are the reason he’s been able to keep his childhood nickname: Smiley.

His first work of art came from the Israeli sculptor Yakov Agam, who traded his art to Ilan for windsurfing equipment. Agam’s experiments with kinetic and optical art were Ilan’s first inspirations to create art of his own. Later, a friend opened an Italian restaurant next to the Romero Britto gallery, and Ilan was able to spend time at Britto’s gallery. Britto’s message of happiness, and pop art’s messages of hope, dreams and happiness still resonate with Ilan.

For his art, Ilan finds objects, or, just as often, they find him. Antique, vintage, and modern objects are made new, vibrant, and repurposed. Each object is unique, and calls out to him, and asks to be made into something fresh. They call out to be seen, if not for the first time then from an angle that’s been hidden. They call for light and shadows. They call out to be celebrated.

Ilan’s art sometimes uses use powder coating, metal, fiberglass or epoxy, but he always bends neon to highlight these objects and create art that we can’t look away from. This brightness reflects the joy he finds in creating his art. The effect of neon is immediate, warm, euphoric. It’s a century-old tool that harnesses some of the same energy found in stars to create a sharpness which our current moment yearns for. In that way it’s vintage, timeless, and modern in a single moment. From deep bliss to passing euphoria, Ilan’s art tries to explore the shades of happiness in the human experience, and to inspire people towards some measure of that happiness.

There’s a vibrant joy to be found in Florida-based artist Ilan Neuwirth’s work that he hopes to spark in others. At its core, Neuwirth’s art is pure joy, inspired by laughter, movement and a free-spirited style that’s uniquely his own.“It feels like it was inside of me since I was born,” Neuwirth says.

He was drawn to the playfulness of pop art because for him, “art is fun, it makes me, and others smile.” His collection is diverse and a reflection of his travels, his hobbies and his vision of the world as a beautiful place where peace and love can thrive.

While Neuwirth is fairly new to the art scene, he is no stranger to success. He is making a splash in the art world after pursuing his passions as a windsurfing instructor, store owner and real estate agent. The secret to his success? His ability to put the best of himself into everything he does, including his beloved art.

For Neuwirth, there is an appreciation of the beauty that is found in all things, including the found objects that make up the bulk of his work. He chooses objects that he refers to as simple, ordinary and immediately recognizable and transforms them into new and vibrant art pieces. Ilan uses a variety of techniques to transform those found objects, including powder coating or enhancing them with metal, fiberglass or epoxy.

Drawing inspiration from the work of Israeli sculptor and experimental artist Yaacov Agam, who worked with color, shape, texture and movement, as well Brazilian artist Romero Britto, whose message of happiness, hope and dreams still resonate with Ilan; his pop art pieces feature a mix of neon and bold hues.

The bold colors are inspired by the Israeli-born artist’s youthful travels with his father, who worked on cruise ships that toured all over the world, exposing Neuwirth to the richness of new cultures. As for his love of neon, he believes the brightness reflects the joy he finds in creating his art.

From deep bliss to passing euphoria, Ilan’s art tries to explore the shades of happiness in the human experience, and to inspire people towards some measure of that happiness. “Everybody relates to my art,” he says, adding that each piece has its own personality that’s meant to inspire happiness – and love – at first sight.

The Peace Vespa
Think back and smell the 1960s: smell sunflowers and denim, revolutions around the world powered by love. The Americans and Russians were launching themselves into space, and on earth young people were defining themselves with music that demanded whole-body movement and art that used their own bodies as their canvas. A generation of young people was making more love than they could hold on to, was ready to be free, was tired of conflict and ready to spread peace. Jazzed and trucking’ for a gas, their scooters got them through town and burgeoning suburbs to the places they could be together. This generation saw that they could change the world instead of being changed by it. If they hung tight with one another they could all contribute what they had: from the cool heads and real gone cats to the squares and Melvin’s, they were all greater together than apart.