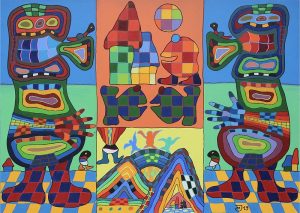 Artist Bio:
Michael Jansen was born in Flensburg on 5 March 1958.  He studied music, Philosophy and Literary Studies in Hamburg. Since 2002, he works as freelance artist in a style, which he developed himself and which he calls Magical Surrealism. Additionally he is also a writer of short stories, poems and theatre plays.

Michael Jansen has started a new, a third form of Surrealism in addition to the “verristic” form initiated by Salvador Dalí and the “absolute” form by Joan Miró which is detached from all realistic feature. Paintings of Magic Surrealism can be described as colourful compositions of true-to-life shapes with clear black outlines, which remind one a little bit of Nikki de Saint Phalle`s motly female figures. The style however is a representation of a philosophical attitude toward life which deals neither with the subconsciousness nor with the human dreams when asleep. It rather deals with a conscious dream of a world of magic. The idea is to turn to a world which has the character of a utopia, but which is at the same time without a concrete message of the Other. This message will never be fully explained or depicted. Only the power of the imagination of the viewers will be set in motion without any kind of limiting prescription.

Michael Jansen takes the viewers of his paintings into the land of Magical Surrealism, into the world of magic and phantasy. He encapsulates positive moments of life in a sea of colours, which lead out of the mists of troubling perplexities.

Michael Jansen has had many exhibition in Germany and also abroad. He is represented by LDXArtodrome Gallery.