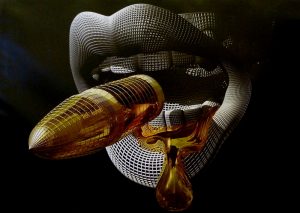 Artist Bio:
Born on 2 January 1945 in the village of Volzhsky village of Saratov region in a family of teachers.

In 1965 he entered the Moscow architectural Institute (MARHI) at the Department of industrial architecture. Already during his studies at the Institute from 1965 to 1971 he was seriously interested in constructivism of the 1920s. While painting, he experimented with form, plastic, texture of materials.. Already in the diploma project in MARHI manifested futuristic ideas: the theme of the project ” the City of the future in Siberia.” The project was influenced by the English group “Archigram”, the American fantasy architect Paolo Soleri and the started construction of the world trade center in new York by the architect Yamasaki.

In the late 1980s— early 1990s, the artist introduces a video camera into his Arsenal, then a video projector. He continues to work as an airbrush, mastering computer and digital technologies and programs. Khudyakov forms a Bank of digital images, consisting of several tens of thousands of images. Projects “Predstoyanie”, “Hotel Russia”, “Russian landscape”, “Moscow panorama”, “life of insects”, “world Map” — all of them are made by synthesis of arts. Khudyakov connects the microcosm with the macrocosm: gazes into the smallest details of the world (series “life of insects”), and at the same time creates his own version of the” Last supper”, presented at the Venice Biennale of contemporary art in 2011. His work is an attempt to create an image of Superman, as well as a version of the new religious art Deisis / Predstoyanie. His stereo pictures, interactive panels and digital large-scale canvases are created with the help of advanced technologies and innovative methods of their synthesis and at the same time solve actual creative problems.

Awards: Medal in honor of the 850th anniversary of Moscow. Gold medal RAH.

A series of exhibitions:”Figure&Myth” (2014) Moscow, Saint-Petersburg.
Just over a hundred exhibitions.