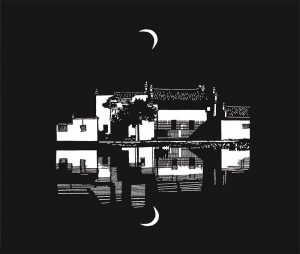 Artist Bio:
Yunhua Zhou was born in Yixing, Jiangsu province in 1935. He is a member of the Chinese Artists Association. He was granted the title Chinese Superior Artist in 1989, an honor he retains today.

His Chinese painting, “Surrounded by Winds, Snows, and Clouds” was selected for exhibition in the National Art Exhibition in 1977. Since then, more than 200 of his master pieces have been displayed at home and abroad exhibitions, many reviews and comment receiving from leading newspapers.

Most significantly, his paper cuttings”Paper cuts recollection of Jiangnan’s Landscape”, was filmed and played by CCTV, JSTV and other TV stations.

The Zhou Family paper cutting collection, has been published by the Beijing International Art Foundation, and was invited to do speeches and exhibitions in many countries like Japan, Australia and France.

In the 1980s, Mr. Yunhua Zhou was to be the deputy Curator of the Liu Haisu Art Museum in Changzhou. Then he led his lover, children to create more than 300 pieces of folk houses subject , which show the love of jiangnan landscape, such as the former residence of celebrities, scenic spots…He has broaden the traditional topics, and opened a generation of paper cutting. In 2004, the National Nuseum of China held the exhibition “Paper cuts recollection of Jiangnan’s Landscape”, among which 100 pieces were collected by the National Museum of China. Many exhibitions were held in Jiangsu Provincial Art Museum,Guangdong Provincial Art museum and Changzhou Museum… He also received dozens of awards in various kinds of Art Exhibitions , which the highest national art award — “Mountain Flower Award” included.

In April 2003, as the invitation of the Chinese Embassy in Japan and Tokyo Fuji Art Museum, fifty-eight pieces paper cuttings by Yunhua Zhou were to be shown in Japan. During the tour，he was impressed by the beauty of Mount Fuji and created a series of works about it，which combined with the style of wood block.