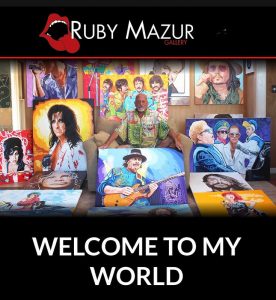 Artist Bio:
Over the past 50 years, Ruby Mazur’s innovative & influential artistry has been displayed in galleries around the globe. At the age of 21, Brooklyn born Mazur was hired as Art Director of Paramount Records, and within that first year he received a Grammy award nomination for his design on the “CrowFoot” album cover. It was at this time that the music industry executives began to take notice of Mazur’s artistic genius. In 1971, just two years into his career, Ruby opened his own creative design agency in New York, Los Angeles and London, working with top record companies including EMI, Warner Brothers, Atlantic, Paramount, MCA, Pye and ABC. ABC Records eventually bought Mazur’s studio and brought Mazur in as Creative Director. Mazur has created some amazing graphics but his most famous creation was the “Mouth & Tongue” designed for The Rolling Stones originally used on the “Tumbling Dice” record sleeve. His outrageous and trend setting designs have graced over 3,000 various album covers for the likes of Elton John, Billy Joel, Ray Charles, Sarah Vaughn, Van Morrison, Jim Croce Jimmy Buffett, and B.B. King in addition to such movie sound tracks as “Love Story”, “Willy Wonka and the Chocolate Factory”, “Malcolm X” and “Lenny Bruce”. These days Ruby lives on Maui, Hawaii … just painting, painting, painting.

For the past 15 years Ruby Mazur has resided on Maui Hawaii, having left the main land (New York & LA). His paintings art currently in the permanent collection at the Bill Wyland Galleries in Maui.

Mazur has created over 3,000 album covers and is most famously known for creating the Rolling Stones Mouth & Tongue which was originally used on the Tumbling Dice record sleeve.
He has been painting his Rock and Pop art for the past 25 years, constantly being commissioned by enthusiast and rockstars alike. His collectors include Elton John, Billy Joel, Jimmy Buffet , Carlos Santana and so many more.