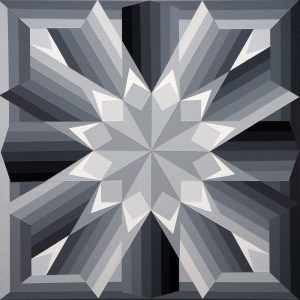 Artist Bio:
Iranian born, Fariba Abein’s work explores geometric abstraction with an emphasis on color study where geometry and color become the subjects of her intriguing paintings. Her carefully selected shades and tones create the illusion of volume, space, and transparency.

Although Abedin’s work is geometric and structural, her concept of work is tender and appealing in its appreciation of the nature and science, Color and geometry. She also conveys a message of love and peace through her work.

She received a Bachelor of Fine Arts in Architecture from Massachusetts College of Art and a Master of Science in Education from Connecticut State University. Then, for the next three decades she studied painting and sculpture at prominent art institutions such as Art League of Houston and Glassell School of Art, Museum of Fine Arts Houston.
She lives and works in Houston and has exhibited, and given lectures and workshops in geometric art at The Museum of Geometric and MADI Art in Dallas, Pear Fincher Museum, Dallas Museum of Art, University of North Texas, Irving Art Center, and in Houston, Asia Society, Lawndale Art Center, Jung Center, Bank of America Center, and the Houston City Hall. She is among the 29 artists on the Houston Arts Alliance, City of Houston’s Artists Roster recommended for public art projects. She is also among Top 5 Houston Artists by Houston Magazine.
Abedin’s work is in the collection of the Museum of Geometric and MADI Art, Houston First Corporation Sky Art Billboards, and United Airlines, Intercontinental Airport Concourse C.

“Fariba Abedin’s paintings dissect light into its prismatic components. She then re-configures these component colors into sometimes large-scale compositions. Reminiscent of early Bauhaus concepts, especially ideas by Johannes Itten in his book “The Art of Color”, Abedin goes beyond the original Bauhaus premises and articulates novel geometric color fields of her own provenance.” By, Volker Eisele

Additional Info:
Sacred Geometry translate complex mathematical expressions into simple shapes and forms. They show how the basic patterns, square and circle, governing the evolution of life workout the most beautiful results. Square stands for the four elements of life, wind, water, earth, fire, and circle stands for the life itself which could not be contained without the four elements.

The circle symbolizes the womb of creation; and the shapes that are formed from these divisions are symbols that embody the mathematical principles found throughout creation. They reveal the inner workings of nature and the inherent order of the universe.

Sacred geometry is complex structures of patterns and forms which can continue indefinitely involving time and space. By studying the nature of these patterns, forms and relationships and their connections, insight may be gained into the mysteries and the laws of the Universe. A believer contemplates about the master mind behind the creation of these complex structures and designs.