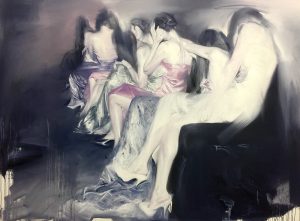 Artist Bio:
Zhang Haiying’s Anti-Vice Series is based on Internet photographs of young women caught up in the Chinese government’s efforts to purge the city of prostitution and pornography. The highly publicized campaign to “eliminate vice and illegal publications” focuses on the apprehension and detention of young women such as these, who are among the most powerless of the country’s citizens. Victimized on one hand by gangs and threatened with fines and prison by authorities on the other, they are often paraded through streets to face insults and ridicule.

Zhang is not attempting to present a case for the decriminalization of prostitution, but as an artist, hopes instead to portray their frail humanity and the sympathy their shame evokes. The series examines the anguish of the purge, from the crime itself to arrest and detention. Taken as a whole, Anti-Vice paintings reflect an awkward condition in contemporary Chinese society.

Additional Info:
Zhang Haiying’s Anti-Vice Campaign series takes as its subject the Chinese government’s recent initiatives in eradicating prostitution and pornography. Executed on monumental scale and in faux social realist style Zhang’s paintings use the devices of propaganda for non-politicised means: his works neither advocate nor criticise illicit activity, but draw from the associated issues of power, exclusion, vulnerability, and perception to create images of emotive discord.

Finding his source material on the internet, Zhang translates photographic images with subtle painterly manipulations to enhance mass media aesthetics and its conflicting messaging. His tones – dramatic reds over cold greys – allude to both authoritative iconography and strip club sleaze, while his stylised figures are made to look strangely hyper-real, like computer generated avatars, or celebrities overexposed in paparazzi swarms; women objectified by their equally desirable and degrading portrayal.

Zhang renders these scenes with a master’s craftsmanship. Hair, flesh, fabric, objects are constructed as self-contained elements, their individual treatment creating a sense of isolation and disunity in the collage effect. His super-pop sheen is exaggerated through painterly veracity: camera blurs, print bleeds, and flash bulb glares are faithfully replicated by brushwork which borders on abstraction. In Series 005 the night vision video effect is perfectly replicated by impassioned smears and smudges, simulating photo realism with intuitive spontaneity.

Behind each of these paintings is a complex story: of destitution, desperation, abuse and entrapment, side effects of economics, migration, and progress; the human costs of commodity culture. By recontextualising the way prostitution is represented and perceived, Zhang’s paintings strive to convey the human condition, with all its indignities and weaknesses, as a duplicitous victimisation of both the oppressed and oppressors.