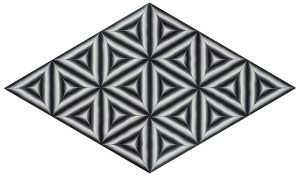 Artist Bio:
About Liao Jianhua
Liao Jian Hua is a young Beijing painter who already makes compelling compositions that resonate for anyone interested in experiencing abstract contemporary art. Of course, on seeing his work, there is the inevitable comparison of his art with the Western abstract inheritance, but at this point in time, it seems wiser to appreciate the art for what it is, rather than arbitrarily assign a legacy that may—or may not—have influenced the artist. Liao works with nearly endless repetition, reiterating the stroke in acrylic or colored pencil, to the point where the paintings possess a stunningly dense composition. At a distance his small marks merge into vaporous color, but then, when the viewer has advanced to a closer point of view, the individual strokes come into recognition. They reveal an unusual discipline of style in so young an artist. A misty atmosphere is generated; one has to look closely not to feel a bit light-headed. Together, placed in a good installation in the gallery, Liao’s efforts work as a seamless expression, with each composition both connected to and separate from one another. Sometimes the overall pattern is recognizable, as occurs in Empty Your Mind (2009), in which blue repetitive circles make their presence noticed as a major aspect of the painting.

Of course, the title Empty Your Mind has Buddhist contemplative connotations, and as a group, the works can be seen as an extended meditation on color. Liao’s style is both independent and reminiscent of the color field painters of the New York School—but they are artists he likely has not seen in real life. Consistently, he has moved according to his own fashion, creating paintings whose subtle hues become the focus of their own investigation; the paint or the pencil marks center upon themselves in a style that appears to be selfless, devoid of personality. Infinite Lines (2008) shows us how the simple continuation of individual rows of strokes,

accepted in their entirety, have the marvelous effect of a brave new world. Atmosphere is central to all his compositions, and it seems as if the pencil marks are constructing a new kind of infinity, into which one must plunge entirely to experience its endlessness. In China today, abstraction still takes a back seat to figurative, socially oriented art, but a painter such as Liao is proving that there is room for an abstractly oriented art whose orientation is contemplative in the extreme. Indeed, the consequences of colored lines in Infinite Lines are, surprisingly enough, oriented toward spatial themes.

In fact, seeing a painting by Liao makes it clear that the experience is not only formal and repetitive, it is also a matter of meditative space. The paintings reverberate in mind, creating a place of endless amplitude, conducive to thought. This is a kind of art in which much of its effect has to do with what happens in the minds of Liao’s audience—the paintings are useful aids to a concentrated focus, one dedicated to the loss of individual self. In another painting, entitled Infinite Lines (2009), horizontal rows of bright red strokes create an eye-catching pattern that intimates limitlessness in a notably beautiful composition—actually, it is so beautiful, its description in words seems to lessen our understanding of it. Of course, one’s experience of an infinite world should be seamless; in this painting, we feel as though the lines continue forever, only superficially ended by the painting’s frame. Liao’s work shows us how to concentrate in a world of myriad variety—by repeating the stroke, he completes his perception of a unified environment of immense implications. He builds the image slowly, moving from row to row of strokes in a discipline of constant effort. The enormous perceptions he suggests in his choice of titles make it clear that his art is a process more than a product. We should pay attention to the insight.

Additional Info:
“Live in peace,disturbed but not perturbed”
──The Move and the Quiet in Liao Jianhua`s Works and the “Daily Art Dhyana”

“In the process of doing something，please do not disturb”, this is a typical phrase used in the current internet language. The first half of the phrase came from the English “verb+ing”tense  showing the sustained state of a certain action; the latter half of the phrase came from a “slogan”often found on the doors of the Chinese or popular in oral Chinese language expressing a kind of fear of or refusal to any kinds of disturbance from outside.The mixture of the two has shadowed the concrete nature of the “action” and the “refusal”，the sentence structure is  more of an warning to the outside. The actual feeling of the sentence is to seek the calm  of the heart reflecting the boredom and the hopelessness of the modern people constantly disturbed by the fast changing world. Therefore, in recent years this phrase has been widely used by Chinese of all walks of life (dispite differences in age, status, profession and sex) and has become a really popular phrase in social life.

“Live in peace, disturbed but not perturbed”──here I want to use the similar phrase structure to vividly express how I feel and how I understand the works of Liao Jianhua.Liao  Jianhua’s home is situated in a rented peasant courtyard in the extreme west of the Xiaopu Village near a little woods.In the middle of the increasingly bustling atmosphere of Song Zhuang, his home appears very quiet where he and and his wife Li Manjin live and paint.It is not spacious but very well organized. They don’t have a fixed job, their life not very rich but quite calm and stable; not very varied but quite peaceful.For the past five or six years since they arrived in Songzhuang, they have been guarding this quietness with no complainte, no annoyance and no regret. This is not only a chosen attitude towards life but also a reflection of their psychological state of mind.

In the past five or six years, Liao Jianhua has done many paintings but all of them are a kind of simplified “forms”repeating themselves endlessly. The overall painting looks very calm, but all those simplified “forms”are all on the move.In the   Dreaming of Sperm  ,“tadpoles”swimming to the same direction dragging their tiny tails.In  The painting of unconsciousness  the dizzy“cells”seem to be splitting and growing continuously，even in the Infinite lines  the“lines”are strecting themselves with tension……These “forms ”are numerous,heavy and complicated but at the same time orderly, overlapping each other and in the same direction, the variations are subtle and boundless. The old saying goes like “the face of a person reflecting his heart and mind”.I understand that this is the instant reflection of the “heart and mind”of the artist.

It seems that the art form related to“Dhyana”has always existed which is using a simple element（an action of handwork、a simplified stroke、a concept shape etc）repeating endlessly this element with no time limit，no visual bound.In 1995  Women’s Ways  exhibition，I said that this form“reflecting the infinitely multiplying nature of life in terms of feeling, and in terms of method it is similar to the continuous handcraft knitting , the personal feeling being instantly relieved and condensed in this single but complex act of handwork”. In the later ten years, this kind of method has been called collectively as “touches similar to knitting”，surpassing the womens’approach, exploring the relationship between the feeling  of the heart and the handwork and also the significance of the process of handwork for calming heart and mind.In 2004  Beads and Touches   exhibition，Lao Li compared this art form to the form of religious “dhyana”，“the repeated and complicated nature of touches  or the action of making something is similar to the Buddhists repeatly moving the beads with hands or reciting Buddhist scripts while in sitting meditation.It has an abstract and metaphysical nature.In this repeated process every stroke of the touch or every action of the hand work is surpassing the objects and phenomena. It is abstract, simple, metaphysical and corresponds directly to the heart and mind. In this sense，complicated or extremely complicated joins the extremely simple, reaching the same goals by different routes because the complicated goes to the simple , the simple goes to the void which is pureness and flatness ”. Lao Li also specially stressed its effectiveness in terms of “calming of heart and mind by oneself.

This method and its effectiveness is similar to“dhyana”.It has been  experienced and proved by many artists.Certainly, artists are not religious persons and art is not religion. Every one of us must have had the experience of “a flash of mind”、“be confused and disconcerted”，because every “thought”（we usually call it an“idea”）is permeating everywhere and going everywhere, appearing everywhere and utterly confused.Most of these ideas just flash across the mind,however some of the ideas are becoming more conscious, more indicated and exteriorated so as to finally to have influence on your body and mind causing different results.“The heart is the heart of the matter, the nature of heart is upright with no dishonest ideas, only when an idea comes from mind, the heart could become dishonest （Wang Xueren  Great Learning  ”.If we don’t clean these ideas，we could feel“confused and disturbed”. Since ancient times,the Chinese have always paid attention to the “combing of heart”，meant to comb the constantly changing ideas so as to control their disturbances or even better, not being disturbed at all by them.

In 2008，through  Catharsis exhibition，I tried to explore the “daily”“heart combing”method of artists as ordinary people.  In  In the World，Zhuang Zi said that it is  easy for man not to walk but it is difficult to walk without leaving traces. We are living in the boundless universe, it is impossible for us not to be disturbed. If the“heart”is disturbed, moved, wrinkled, dizzy, confused, or even broken,  we need not fear this. The important thing is to “return to the original state”。Therefore， using different methods to take out heart to keep it clean and bright，has become the indispensable need of mankind with“ideas”. This is what I call“Catharsis”。“ Catharsis”is needed by every person using heart but we could use different methods。Modern life is far from nature, mankind is more and more lost and fragile，heart is easily incantated by various temptations.Of course，“Catharsis”does not necessarily mean consciously practicing a religion. Art is an important part of the daily life of artists, art could be an ideal, a pursuit, why could not it be a “combing of heart”， “to relieve one’s heart of incantation”？

In this sense，I feel that Liao Jianhua is excellent in practising“Daily Art Dhyana”. Apart form catching“ideas”in time，simplyfying them into“concepts and images”，his works also require indomitable spirit and continuous perseverance. This is the most important and what I admire the most. If in this way one could not only live with heart in peace, but also express feelings in art, isn’t it the most pleasant way？