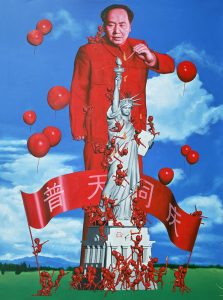 Shi Lifeng’s latest works are about utopian, dream-like visions of life. Shi Lifeng tells compelling stories of present struggles in China with strong contrasting colours. The characters in his paintings are a nervous bunch. They are trying to leave a life of poverty and plight by running, jumping, climbing and – quite often – falling as well. It’s life at the cliff’s edge, aware of the present danger but with a strong message of hope for a better future.

Shi Lifeng is well known in the international art scene and has participated in over thirty national and international Art Exhibitions. He is also the first Chinese artist who was chosen for an international album cover design of the US rock band Guns N’ Roses(Album Name: Chinese Democracy).

Portrayal of the collective spirit of help-seekers
Assessment of Shi Lifeng’s Art creation
Usually the help-seekers are those of marginalized minority who could not be politically, economically or mentally self-reliant and survived in the society, in details, they are vulnerable groups of individuals. However, when we are faced with the images in Shi Lifeng’s works, the general concept of the minority help-seekers is fundamentally changed, that there is no specific characteristics of age, occupation, personality except the gender difference among this group of people, in order to get out of the desperate plight, they are running, jumping, climbing and falling.

The figures in Shi Lifeng’s works are not the generally-sensed small number of people, because the environment these people living in are always collected with the experience of the collectivized chinese political and economic life, or with the collectivized Chinese world view. In his earlier works he used the symbols of political power and the public social cases as the main background, in which the fate of ups and downs of the figures is changing along with the swinging of the rope and ladder in the wind, this is not a portrayal of one individual or of a group of people, but the actual state of all chinese in one period or even eras. Also the meaning in the works by Shi Lifeng is far more than simple and direct, in more works, we can see the running, climbing or falling persons struggling in boundless wilderness or in high-altitude, pacing up and down and hesitating in the closed walls or at the edge of steep cliff, From these images, we are aware of that the artist’s vision seems to be more profound, he crossed the description on the specific environment, and tried to make more general and in-depth exploration on the relationship between people and their surrounding world. The fate showed in his works is not only related with the specific historical events and political space, also more linked with the concerning environment which formed people’s individual view and world view. The history pages are turning, but where is the sky for people’s inner hearts? The history influenced  people, but can it determine people’s today and future? Of course, people always live in the past, but spend more time in the hope for present days and the future. How to be able to achieve the hope or how to pursue?  the most important is on their own individual view and world view. To solve and overcome the plight in the collective mind of generations of chinese people, to set up the courage for life, the most fundamental is to learn to use the individual intellect and judge to create, instead of being interferenced and controlled by the so-called political.

Works by Shi Lifeng are full of sorrow, the figures have no specific personal characteristics, only strong rigid body motions covered in red, precisely, he have the images portrayed as similar puppet-like sculptures, it is only through their actions and the physical structures of an imbalance we can feel their difficulty-expressed inner pain and hope. because of the thick and heavy colour it’s impossible to peep into their deep hearts which is closed to the external surroundings, no dialogues, no communications, but in order to change their situation they continuously kept struggling and trying their best. By the using of the single red colour and the treatment on the parts of the high-light, The artist effectively conveyed such mood of sad. The red color is so bright and attractive but not only a reflection of the physical, for generations of chinese people, which is the most representative manifestation of the collective experience, today this colour is uniformly  parcelling these climbing people, It is incredible that they still be able to breathe and try to change their situation.

In order to strengthen the contradictions and conflicts between people and the environment, the artist intends to arrange the closed or steep space. And on dealing with the relationship between primary and secondary characters, Shi Lifeng give prominence to the red impression of the figures and to the symbolism and the nervous sense of the physical actions by leaving big area in single red colour as the background and environment, This arrangement made his canvases like a stage with distance features, which created the contradictory contrasts between history and reality, individual and collective, subjective and objective. In Shi’s latest artistic creation, he even restored the thinking on the relationship of this environment and the main figures from the plane canvas to the real three-dimensional space: that’s his sculptures of red figures. Though the creation means on the shape and color had no change, but the existence of the FRP figures in the reality space must inevitably bring out many kinds of unpredictable visual effects and psychological experiences upon the real surroundings, which it’s probably difficult to express and expect in paintings.

From the stage of paintings to the one of reality, Shi Lifeng shifted his Strong attention on the fate of his characters from the image composing to the real life experience, which tells that Shi Lifeng indeed has a more broad and far-reaching vision on caring about the fate of the figures in his art works. He intended to create such an art scene as like the audience standing and experiencing in the real, intended to reproduce and upgrade the reality to arouse the audience’s inner unspeakable feeling, because in reality everyone of us needs help for soul, only the expression on the collective unconscious helplessness and longings is achieved, then he is a true artist.

The Reconstruction of The Other, Songzhuang, Beijing, China