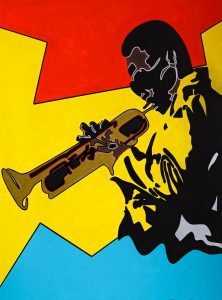 Artist Bio:
American street artist Tysen Knight was born in Fort Lauderdale, Florida, but called New Jersey his home until moving to Philadelphia, Pennsylvania after high school. Tysen currently resides in Palm Springs, California, where his artwork can be found throughout the area; as well as hanging in local galleries. Tysen’s love for art has opened the door to many different forms of media including acting in feature films and music videos, modeling, and directing his own full-length documentary, “The Art of Hustle: Street Art Documentary.”

Growing up in the peak of the Street Art Movement, Tysen was inspired by the works of famous street artists such as Jean-Michel Basquiat and Keith Haring. Tysen’s art style also reflects the styles of Fine Artist Pablo Picasso and Pop Artist Andy Warhol. Tysen uses these influences to create unique pop culture graffiti pieces that can not only be found on city murals, but in Fine Art galleries. Tysen’s artwork has blurred the line between street art and fine art, to create something new that captivates people from all walks of life.

Tysen’s love for the arts does not stop on the canvas. His passion for creativity has landed him roles in the Hollywood films “Epic Movie” and “Nora’s Hair Salon 2: A Cut Above.” If you’re driving through the streets of Los Angeles, California, you might see Tysen on a billboard for the “Meth PSA Drug Awareness Campaign.”

Tysen Knight is currently on the Film Festival Circuit for his latest film “The Art of Hustle: Street Art Documentary” which he directed, produced, wrote, and starred in. Tysen’s film has been featured in numerous film festivals, including The American Documentary Film Festival in Palm Springs, California, The Oregon Documentary Film Festival in Portland, Oregon, and the Street Art Movie Fest in Grenoble, France. The Film has been received well by critics and audiences alike, even taking home the Award for Best Feature Film at the Oregon Film Festival, and an Award of Recognition at the Impact Docs Awards 2018.