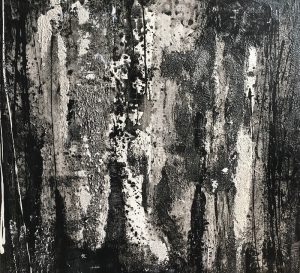 Artist Bio:
Leslee Melamed (born 1968) is an American painter and graphic artist, born in New York City. On canvas, she is associated with the bold use of texture and judicious color. Early influences were Mark Rothko and Franz Klein. As a young painter, Leslee studied with Eileen Raucher-Sutton.   In 1990, she graduated from The School of Visual Arts, where she was greatly influenced by iconic graphic artist Milton Glaser. After graduating, she pursued a career in graphic arts, eventually becoming responsible for all printed material for the North American retailer, Lord & Taylor.

In 2002, Leslee and her husband, actor Fred Melamed, left New York City to raise their children in the beach hamlet of Montauk. They remained there happily until 2013, when her husband’s work prompted a move to Hollywood.

Her work often reflects impressions of life in these three milieus—the tight packed geometrics of the city, the wild freshness and natural beauty of the East End, the hyper-saturation and Fauvist brilliance of life in Los Angeles, where the Melameds still reside.
One of Leslee’s sons has autism. A percentage of every sale is donated to autism related research, treatment and advocacy programs and charities.